You Have To See It To Believe It — An Invisible Helmet?! 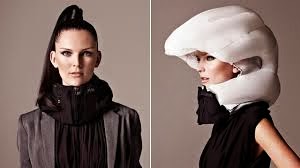 Tired of Helmet Hair? Now You Don't Have To Be!


It is well known that wearing a helmet when you ride a bicycle greatly increases your chances of surviving an accident. If you are constantly riding in traffic, commuting, or just really enjoy riding — your helmet is probably the number one thing you want to make sure you're wearing when you pedal away from your house.

Anna Haupt and Terese Alstin, both Swedish industrial design students came up with an idea for an invisible helmet in 2005 while they were studying at the University of Lund.


The technology is based on airbag technology but also uses motion sensors to detect when the body is moving abnormally. In circumstances when cyclists are in an accident or begin to fall, the helmet deploys an inflatable nylon hood around the cyclists head.

"It recognizes that your body is having an abnormal movement that you can't have unless your body is positioned radically different than how it's supposed to be," Alstin says. "In a way, it's technology that has existed before, but used together in a new way.

A cold gas inflator, positioned in the helmet's back collar, pumps the hood with helium when the sensors are triggered. The helmet stays inflated for several seconds so that it can absorb the shock of multiple hits in the same accident, before releasing the gas, and slowly deflating.

"We're hoping to enter new areas of usage and develop the technology further into new applications [so we can] save people in other ways," she says. "There's a lot to be done– we're definitely not short of ideas"