June 13, 2013 will be a date that will be remembered in aviation history as the day the first Human Powered Helicopter was born. A Canadian team called Aero Velo is comprised of mostly students from the University of Toronto. 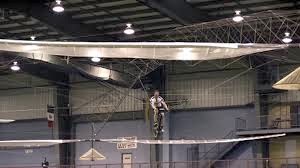 They built a quad-copter design they named Atlas. The American Helicopter Society's challenge was posed by Igor I Sikorsky over 30 years ago. It represents the third largest monetary prize in aviation history. The monumental feat requires a human to hover to an altitude of 3 meters under his or her own power, and to remain aloft for at least 1 minute. The challenge is a test of ingenuity, athleticism and determination.

The design was created from a frame made of carbon-fiber/Vectran, while the blades were made from polystyrene, balsa wood and polyester film. These elements were then tied together by a bicycle at the center of the machine.

Dr. Todd Reichert, one of the leaders of the team, pedaled to lift the AeroVelo Atlas for 64.11 seconds. The craft reached an altitude of 10.8 feet and drifted only 32 feet during the flight, which took place inside a field house in Vaughan, Ontario.

"No one knows better than we do the enormously difficult engineering and human performance challenges that must be overcome in order to meet these flight requirements." the team said in a statement. "We salute this historic accomplishment of the AeroVelo team and the intense dedication, innovation, research and hard work we know it required."
Posted by Randy Kirk at 9:00 AM No comments:

How To Choose The Right Mountain Bike 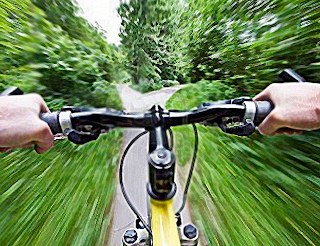 How can you possibly choose the right mountain bike when they come in so many different shapes and sizes, and are used for so many purposes?

Numerous manufacturers provide bikes that are specifically developed to tackle tough terrain and rigorous riding. The most important factor when determining which mountain bike to get is your personal riding preference.

All of these things will determine which is the right mountain bike for you.

Let's start with the easiest of those.
You like the look and style of a mountain bike, but the reality is the most you will be doing with it is going on some dirt roads.

At that point anything that we carry that is basic and looks like a mountain bike is going to be a good buy. It's still going to have a more dual purpose tire that will be knobby, but it will still roll smooth on the street.

That would be the first thing. Most of the time you will have 21 speeds, an aluminum frame, Shimano or SRAM components. Pretty basic. At this point you don't need disc brakes (But they are nice). You can get a linear pull brake or a v-brake, and you'll be fine. It would be much better for you to get an upgrade in components than to opt for an upgrade to disc brakes at the entry level. 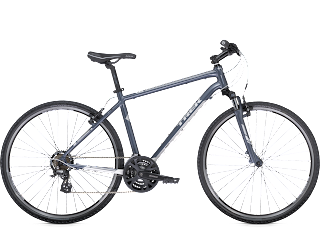 I may eat my words a little by using the Scott Sporster as an example. It's a go-anywhere machine that is road-bike fast, hybrid-bike capable and fun everywhere. It's lightweight aluminum frame and 63mm travel suspension fork so it floats over roads and paths. 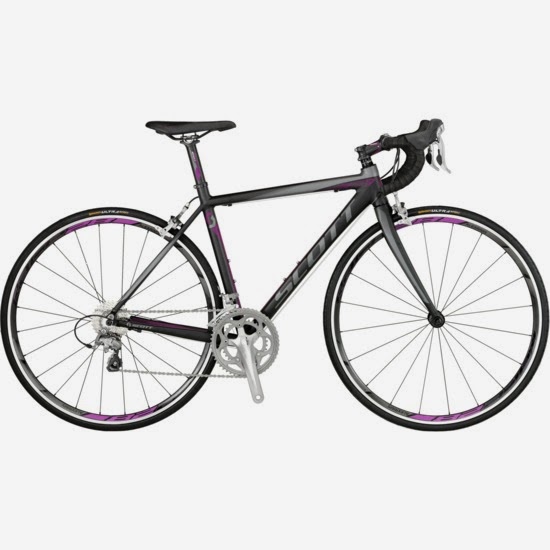 And it comes with disc brakes.

The Contessa Speedster 15 features durable and economical Shimano 105 parts on a 6061 double butted alloy frame for a lightweight bike at a reasonable price.


Next, for the guy or girl that wants to do a little bit of mountain biking, but not to do extreme jumps or dropoffs. Maybe you just want to hit some local trails with your friends. One of the first features you'd look for is: an adjustable front fork. You want a front shock that has enough travel and enough adjustability to hit those bumps and take up the shock and abuse of hitting rocks and potholes and rain-ruts. The next thing would be looking into disc brakes. The more serious you get about riding, the better brakes you're going to need because of the dirt, mud and grime. You will need better stopping power in those dirty conditions and on steeper descents. Going up and down hills requires a little more precise shifting than just on flat ground. On this type of bike you can go mountain biking often and expect it to live up to the use or abuse on the trail.

The new custom butted 6061 aluminum Scale 29 Comp is a lightweight and durable 29” hardtail. With Shimano brakes and drivetrain, and the same celebrated geometry as its carbon siblings, it gives you a great value in a big wheeled bike.


The next level up means you have been riding the trails a bit and now you need a new bike. You're going mountain biking every weekend, hitting all the local trails and going to harsher conditions to ride. At that point you're going to be looking for something with longer travel on the front fork that will be larger in diameter. You may get many more features on the front fork, including lockout or damping control. The better the front fork, the better the bike will handle in adverse conditions. You may want to go to hydraulic disc brakes even rather than cable disc brakes, kind of like upgrading to  power brakes on a car. The rims on the better quality bikes are double walled, and the spokes come out of a reinforced  "eyelet" rather than just a hole in the rim. This makes them much stronger and better able to handle rougher terrain. At this point you may want to get that full suspension bike, whereas for a first time rider would want to stick to a hardtail. 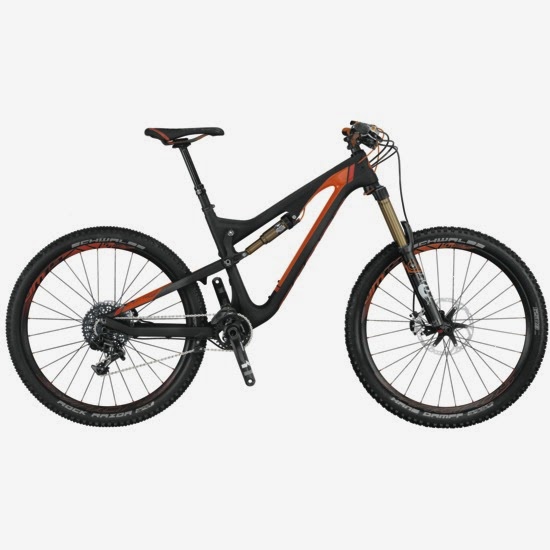 Read about the Scott Genius 700 LT

Another consideration when purchasing a mountain bike would be whether to get 26" or 29" rims. This is completely based on preference. The larger diameter (29") wheel is gaining popularity amongst experienced and novice alike. Having 29" wheels allows for better traction due to a larger contact patch with the ground as well as the ability to roll over trail obstacles with more ease while maintaining momentum. The novice rider may find more confidence riding through technical terrain.
The trade-offs with bigger wheels are slower acceleration and increased weight due to the mass of the larger wheels and tires.

The last consideration is weight. When you are selecting a mountain bike for racing, it's important to keep the weight of the bike down. Mountain biking at a higher level requires riding up and down hills of all sizes, over obstacles with frequent braking and acceleration. The lighter your bike, the easier it is to accomplish these feats. Never sacrifice strength and durability for weight.

Remember that you can always come in and demo a bike to find out what works for you. We have a lot of options and sometimes you just need to sit on different bikes to figure it out. 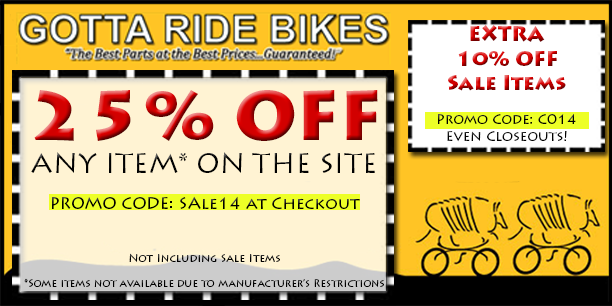 Tips on Stopping BIcycle Shorts from Chaffing Your Sensitive Skin

What is chamois cream?

Because cyclists go commando while riding (you read correctly—no need to wear underwear with bike shorts), there’s often a need to prevent chafing on the bike and soothe the skin when not in the saddle. Chamois cream does both.

It’s a lotion that can be applied to both the chamois and directly to the skin to lessen friction between a bike saddle, cycling shorts and skin. It also works to fend off bacterial and fungal infections and prevent saddle sores. In other words, for people logging serious miles, it’s a dream come true. ButtonHole can also be used off the bicycle as a salve to soothe and moisturize the skin and treat saddle sores.

Utilizing the highest quality chamois cream ingredients, Enzo’s ButtonHole Chamois Cream has been engineered to reduce friction, inflammation and other sensations that make the button angry.  The longer the button can stay on the bicycle saddle, the happier you and the button will be. Enzo’s combines melaleuca oil, hamamelis, the Wu-Chu-Yu herb and organic silicone compounds to produce the ultimate button protection during those grueling cycling rides.


How to Use Chamois Cream

Excuse us while we get a little personal and give you some info on how to use Buttonhole.  Spread a layer on your chamois, pre-ride, so that when your seat hits the bike seat, Enzo’s Buttonhole will be there to help make it a perfect union. If the chamois is thick, feel free to layer on the ButtonHole a little thicker.  Also do a two-finger dip spread directly onto your skin in any place where your bicycle saddle and your shorts might rub and create friction. In the end, don’t be shy; liberal use is better than not enough. Boom, ready to ride.

Enzo's is passionate about developing and producing high quality bicycle products at an affordable price, without compromising product performance. They don’t want anything on your body that’s a known eye or skin irritant, shown to cause cancer or associated with things like Formaldehyde, and you surely don’t either.

In fact, Enzo’s s as picky about what they put into their products as they are about what they keep out. Enzo’s promise that you’ll never find any of the following ingredients in Enzo’s Cycling Products: parabens, mineral oil, DMDM hydantoin, Oleth-10 or Triethanolamine.

Here's Why:
PARABENS: Used as a preservative agent in cosmetics, parabens can cause skin irritation, contact dermatitis and rosacea in individuals with paraben allergies—a small percentage of the general population. Because parabens can mimic the hormone estrogen, certain studies have concluded that exposure to them may be indirectly linked to breast cancer.
MINERAL OIL: A common ingredient in many skin care products, used to promote moisture. Mineral oil is a scentless clear liquid, the byproduct of the distillation of gasoline from crude oil. Due to its nature of creating a thin layer on the skin, this liquid isn’t easily absorbed by the skin, which in turn can clog pores.
DMDM HYDANTOIN: Most commonly used in cosmetic products and shampoos as a preservative to prevent mold and mildew. Can be a strong eye, skin and lung irritant. Skin contact has been known to cause allergic eczema (dermatitis). It is also a formaldehyde-releasing agent and may cause reactions in formaldehyde sensitive individuals including blistering, burning and itching of the skin.
OLETH-10: This ingredient, commonly used in skin care products, has been found to be possibly contaminated with impurities linked to cancer and other significant health problems. It has also been found to be a mild to moderate skin irritant.   TRIETHANOLAMINE: Triethanolamine is used primarily as an emulsifier and surfactant—something that helps a product spread over a surface. It also serves as a pH balancer in many different cosmetic products. A known eye, skin, nose and throat irritant that can cause liver cancer in rats.


Buy in one of our San Antonio Stores or Buy Now on Amazon.
Posted by Randy Kirk at 9:24 AM No comments: